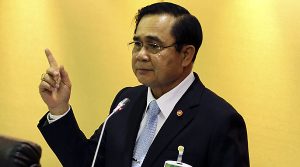 Shuffling the pack won’t improve Thailand’s hand
The Nation July 28, 2015 1:00 am
Decision to rejig the Cabinet comes after a year of deepening economic woes and ‘frozen’ social division

Prime Minister Prayut Chan-o-cha is set to make cosmetic changes to his Cabinet, but these will not solve any of the deep and growing political, economic and social problems now facing Thailand.

The obstacles are beyond the ability of Prayut and his crew to cope with.

The actions taken by the junta and the prime minister in the year since they seized power are merely repercussions of pre-existing problems, which they do nothing to solve.

The fundamental reality, which is being ignored by Prayut, the military and the elitist establishment, is that military coup was itself a part of the problem, not a solution as claimed.

First of all, it is widely acknowledged that the country is deeply divided along both political and social lines. It is not a simple question of a conflict between two camps of politicians, as Prayut has maintained all along. Compounding the crisis is the fact that the military was not a neutral party, as it claimed, but has sided with a particular faction from the beginning. Hence the junta and its supporters in the National Reform Council do not qualify to oversee the process of reconciliation.

Second, the coup-makers have swept away the foundations of democracy while simultaneously claiming to be enacting democratic reform. The absurdity of that contradiction seems lost on the junta. Prime Minister Prayut talks of democracy, yet at the same time he orders his soldiers to hunt for citizens who express “difference”. Students and social activists, whose only weapons are thoughts and words, are regarded as a threat to national security by the junta.

Thailand has a long history of military coups, none of which has done anything to further the cause of democracy. To the contrary, each and every one has consolidated the power of an authoritarian elite.

Third, the junta has stuffed its administration with incapable individuals who have no mandate from the people whose interests they are supposed to be serving. Prayut, as junta leader, must take much of the blame for this state of affairs since he handpicked his own men for Cabinet positions. With changes now in the offing, we can only conclude that the wrong men were picked for the job. While it’s true that certain members of the military might have some knowledge of economics, none of those in the Cabinet know how to run an economy in troubled times. Prayut’s economic tsar has an impressive background in banking management, but his actions have failed to restrain or reverse the downturn. Thanks to an obsessive prejudice against “populist economic policy”, his measures to stimulate growth have been too little, too late. The government’s faith in an upswing powered by investment from the business sector has proved unfounded, yet it remains very reluctant to intervene to alleviate the plight of farmers. If a vast number of disadvantaged Thais are left to languish in poverty, the engine of growth that is domestic consumption suffers.

Fourth, the coup, junta rule and misjudged foreign policy have weakened Thailand’s position when it comes to negotiating with other countries. Though no direct economic sanctions were levied against Thailand in response to the coup, our trade partners suspended negotiations for more market access to certain economic blocs. Meanwhile the junta’s lax management of the aviation and fishery sectors has triggered penalties and ultimatums from foreign powers. In normal times, foreign policy is driven by economic interests, but the junta is instead focused on using its diplomats to justify the coup to the international community.

Finally, Premier Prayut has delivered a very confusing message with his Cabinet reshuffle. While he repeatedly blames politicians and elected governments for the deep-seated problems afflicting the country, the figures he is so desperate to bring into his Cabinet are politicians, including former ministers from previous elected administrations. After holding the electoral system and democracy responsible for placing the “wrong people” in charge, Prayut is now poised to prove that his way is no better, by placing the same people at the helm of his own administration.

NCPO warns former PDRC leader to steer clear of politics at press conference
SUTHEP THAUGSUBAN, the former leader of the People’s Democratic Reform Committee (PDRC), said after leaving the monkhood yesterday that he would not seek amnesty for himself.

He said he was fighting various charges ranging from treason to terrorism and he could be sentenced to death or face life imprisonment, if found guilty.

“I will not plead for amnesty for myself or for those who commit grave criminal offences, especially lese majeste because it is a crime against national security,” he said.

Suthep said he had spoken to Democrat Party leader Abhisit Vejjajiva on Monday during a group ordination at a temple in Surat Thani, but the discussion was nothing special. “Abhisit never persuaded me to return to the party because he and other Democrats understand me well as we worked together for a long time. After I quit the party, everyone knows that I will not return to the party again,” he said.

Meanwhile, General Chatchalerm Chalermsuk, deputy secretary-general of the National Council for Peace and Order (NCPO), said yesterday that Suthep would be banned from speaking to the press if he intends to discuss politics. Suthep, who finished his stint as a monk yesterday, is planning to speak to the media tomorrow.

http://prachatai.com/english/node/5349
The content in this page is not produced by Prachatai staff. Prachatai merely provides a platform, and the opinions stated here do not necessarily reflect those of Prachatai.