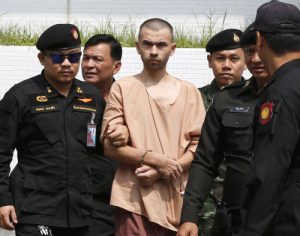 An interpreter for the two men on trial for last year’s deadly bombing in Bangkok denied he was carrying drugs when police arrested him Wednesday after he testified in their trial.

Sirojiddin Bakhodirov, an Uzbek man who’s been helping translate for the two Uighur defendants since September, denied possessing marijuana and crystal meth when the police stopped him on Soi Sukhumvit 5. Police said it was mere coincidence that brought them to stop and search Bakhodirov on the same day he testified in a military courtroom that he has been attacked and threatened to not help the two men.
He said he was not involved and the drugs did not belonged to him,” said Schoochart Kanpai, Karadag’s lawyer who went to meet him at Lumpini Police Station. “So he refused to sign the record of the arrest.”

Bakhodirov, 38, has been interpreting for Adem Karadag and Yusufu Mieraili since they were placed in military custody in September. Karadag, aka Mohammad Bilal, and Mieraili are accused of staging the bomb attack at the popular Erawan Shrine on Aug. 17, killing 20 people, mostly Chinese tourists. Bakhodirov, who’s overstayed his visa, expressed fear he might be deported to Uzbekistan.
According to police’s arrest record, which was distributed to reporters, officers learned from an informant that a drug-carrying foreigner was seen near Soi Sukhumvit 3, and they apprehended Bakhodirov at Soi Sukhumvit 5, a street colloquially known as Soi Africa for its concentration of foreign nationals.

Officers found 0.80 grams of crystal meth and 7.2 grams of marijuana on the suspect, according to the police report, which misidentified him as Turkish.

Col. Pornchai Chalordech, commander of Lumpini Police Station, said it was merely a coincidence that the suspect is an interpreter for the men who were the most wanted terror suspects in the kingdom.

“It was just a coincidence that he was interpreter for the bombers,” Col. Pornchai said by telephone. “We didn’t [stalk] him or anything. The police patrol thought he was acting suspicious, so they arrested him and found the drugs.”

But defense lawyer Schoochart, who had talked with Bakhodirov at the police station, said the Uzbek man told him a very different story.
ochart said he and other defense lawyers went to have lunch with Bakhodirov at Nouvo City Hotel after this morning’s trial, then Bakhodirov’s friend called him that he needed the key of the room they were staying, so he abruptly left the table without finishing the meal.

According to Schoochart, Bakhodirov said the taxi he took from the restaurant was stopped by police. He was ordered to the ground and told to put his hands up. Upon searching, police produced the drugs which he said he had never handled.