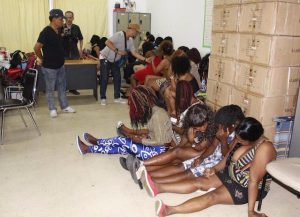 Speaking to reporters Tuesday after his weekly cabinet meeting, Prayuth challenged them on why they believed what foreign media wrote. Still, Prayuth also said he ordered raids on the city’s plentiful brothels.

To show their efforts, police Wednesday raided a bar called Club 4, where an illegal, second-floor operation was selling sex to foreign tourists. Owner Chayanuch Laokliew, 36, was charged with pandering.

A fine of 2,000 baht was divided equally between the sex worker and the bar, with each paying half, the city’s deputy district chief said.
Sex workers found as police raid a bar illegally providing prostitution in Pattaya Wednesday

Speaking to local reporters Wednesday, Pattaya’s police chief said he suspected the news was fed to the tabloid by disgruntled British business groups in the area. He provided no evidence to back the claim.

“They might have gotten the wrong information. It must come from a misunderstanding,” he said before claiming he had to go to a meeting and hanging up the phone.

TWO BIG news stories about resort city Pattaya emerged almost simultaneously 10 days ago, but the country did not know whether they were coincidental or related.

First, it was the appointment of new Pattaya mayor Pol Maj-General Anan Charoenchasri.

Prime Minister Prayut Chan-o-cha, in his capacity as head of the National Council for Peace and Order (NCPO), invoked his absolute power under the interim charter’s Article 44 to appoint Anan.

The order, with immediate effect, was published in the Royal Gazette on February 16.

The term of the previous mayor, Ittipol Khunpluem, expired last June and a permanent secretary of the city had been serving as acting mayor, because NCPO orders prohibited a new election being held.

Anan told reporters that his main missions were to ensure there were no water and power shortages while also ensuring the city’s roads were in good condition and its civil servants were “happy”.

Anan is a former deputy chief of the Police Investigation Division 2, where he oversaw the eight eastern provinces. He previously served as Pattaya’s interim second deputy mayor in a council appointed by the Interior Ministry in 2016.

The government sent Pracha Terat, the Interior Ministry’s chief inspector general, to help Anan by appointing him chief adviser to the mayor.

The second news piece, which was bigger than the first one, was a report in the UK’s Mirror newspaper calling Pattaya “the sex capital of the world” and “sin city”.

Published on the same day Pattaya got its new mayor, the so-called “gutter press” claimed Pattaya was home to as many as 27,000 prostitutes, or one in five of the destination’s entire female population.

“You are Thai media. Will you believe [the UK media]? Police did arrest [the prostitutes]. I will ask police to crack down [on the sex trade] and see who will get into trouble,” the premier said angrily when reporters asked him how the government planned to tackle the sex trade issue after a Cabinet meeting last Tuesday.

“I don’t promote the sex trade. We follow the laws,” he said.

“Instead of pushing pressure on us [the government], you should help to explain for the country. I don’t understand why you have such an idea.”

The public may wonder why the premier got angry but Pattaya’s reputation as a sex industry hub should not surprise anyone.

Pattaya’s standing as a tourist destination is derived in part to its sex industry and nightlife, and this notoriety has influenced the city’s evolution in many ways.

Prostitution in Thailand is technically illegal but tolerated in most cities, including Pattaya. The city’s vast numbers of bars, massage parlours, saunas and hourly hotels serve foreign tourists and locals.

“So Pattaya is the sex capital of the world … Tell us something we don’t know” was a general theme among Thais responding to the UK article via online forum Thaivisa. In response to the matter, it seems Thais generally shrugged their shoulders and said “so what?”

Following Anan’s appointment and the controversial article, Prayut might convince the public that he is serious about cracking down on illegal actions, including the sex trade, and cleaning up the city’s bad image.

Thai authorities showed much enthusiasm in countering the UK article.

After the tour, he said Pattaya now had a healthy tourism industry.

“Pattaya’s reputation and image has improved … Everything is now in order. The city has not only entertainment or nightlife businesses but also sport competition events and more modern transportation,” he said.

The tourism industry in Pattaya generated up to Bt100 billion revenue a year, he said.

Pattaya and tourist police on Wednesday launched a publicity campaign to improve the resort’s image.

Despite admitting the sex trade exists in the city, high-ranking police from Chon Buri and Pattaya denied it is the world’s sex capital. They said recent conflicts among foreign businessmen could result in information being distorted to destroy Pattaya’s reputation.

Sadly, the attention authorities are paying to the issue will soon fade away. And although many people realise the problem as stated by the UK tabloid exists, authorities will pretend it does not and will turn a blind eye to it.