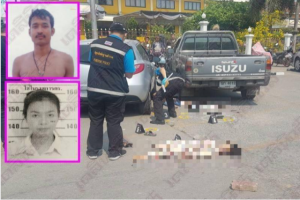 Tied in a knot: the Thai wives who go abroad
After 12 years in a bad marriage, Mali, a 33-year-old woman from Kham Ta Kla in Sakon Nakhon, made a bold move that many women from her village would never dream of doing. Getting a divorce bears a heavy stigma in a culture where special emphasis is placed on remaining a virgin before marriage. It’s hard to find Thai men interested in dating female divorcees.
But Mali had had enough of her abusive Thai husband who would spend all day drinking and was incapable of working. She divorced him to seek a better future for herself.

She realised no Thai men from her own village would want to pursue her as a partner, so she decided it was best to put her past behind her and start a whole new life in Bangkok.

In 2006, Mali moved to Bangkok where she found work at a restaurant in the Sukhumvit area. A majority of her clients were Western men. With a fit body and pretty face, it wasn’t hard for her to get male attention.

One day at work, she met a German man named Hunt who was enamoured of her straight away. At that point, Mali’s English-language abilities were limited, so she spoke to Hunt with the help of a friend who knew some German and some English. Hunt knew he wanted to date Mali, but she told him she was still married and, besides, she already had a daughter.
But Hunt didn’t mind the fact she wasn’t a virgin. She agreed to go out with him.

Over the course of three months, they both fell madly in love. They got married not long afterwards and moved to Germany together.

That’s where Mali’s Cinderella story took a terrible turn — she was sold off by her husband to another German man.

Mali’s tale of leaving Thailand is what many Thai girls, particularly from the Northeast, dream of. In this part of the country, the job market is limited and the minimum wage low.

In a place where well-paid jobs are nearly impossible to come by, marrying a Westerner is considered the next best way to get out of poverty. But not many people know what these women have to go through and how many of them end up in broken marriages.
MY WIFE, MY GOODS

After three months of dating, Hunt asked Mali to marry him. He wanted to take her back to Germany with him. Mali felt a love she had never experienced with her ex-husband.
Shortly after, they got married in two ceremonies — one in Sakon Nakhon and one in Germany. The first few months of married life seemed to go smoothly for the couple.

Then Hunt turned abusive. He started to get upset with seemingly everything that Mali did. After three years of a bad relationship, Hunt had enough of Mali. He wanted to get rid of her.

“I couldn’t speak German and I had a limited knowledge of English,” said Mali. “One time, I saw Hunt talking to Frank, his friend. They were looking at me and pointing at me, but I had no idea what they were talking about. The next day, Frank came back with money in his hand. He gave the money to Hunt and told me ‘let’s go’.”

Mali had no idea what was happening in the moment. Hunt simply told her to pack up her belongings and get out of the house. She was confused but followed his instructions.

She was driven to Frank’s house where, after a week of staying there, she realised she had been sold off by Hunt. From thereon in, she performed the role of the “good wife” — cleaning, cooking and having sex with Frank. She had barely known him before then.
They lived together for two years before Mali was sold off to another man — discarded like expired goods. She had no negotiation power and no safe place nearby to flee.

So she went along with the men, having no other choice.

“I missed my family so much, especially my daughter,” said Mali. “I wanted to go home but I couldn’t. I didn’t have any money at all. I thought I would live a glamorous and happy life in Europe with the man I loved, but in fact it was nothing but a living hell.”

The third man got tired of Mali within a year. She was sold off yet again to his friend named Mike. Of all the German men she had been with, Mike seemed to care about her the most sincerely. He helped send her to language schools, where she learned both German and English. He cared enough to ask Mali how she ended up in this life.

After six years of being moved around from one house to another, Mali felt she had met a man who truly loved her. With him, she knew she would never be sold off or exploited again.

Mali lived with Mike in Germany for four years before moving to Sakon Nakhon to build a house in her hometown. At the age of 44, she had made her dream life come true.

Noi, a 38-year-old woman from Khon Kaen, is the daughter of proud parents. She left her hometown of Nong Na Kham at the age of 20 to work in Bangkok. Every month, she would send home money so that her parents and siblings could enjoy a good life and secure future.
Noi had a high school diploma and a decent command of English. She didn’t have a large variety of jobs to choose from, but she always managed to get work and send home enough money to cover her family’s living expenses and her siblings’ education.

After six years of working in Bangkok, Noi moved to Pattaya for a higher-paying hotel job. It was here where she met Michael, a hotel guest from Germany. They went on one date and vowed to stay in touch. He returned to Pattaya once a year and, after his third visit, Michael asked Noi to marry him.

Noi’s parents were delighted to hear the news. Several women in their village had married Westerners and seemed to have a better life. They were anticipating the same for Noi.
The couple got married in Khon Kaen, then moved to Germany together. That’s when she realised that Michael had neglected to tell her certain details about his life in Germany. “He has no home,” said Noi. “He basically lives in a motor home in a park. We sell vegetables at the local market for a living. The money is only enough to support ourselves. I have barely any money to send back home.”

Noi occasionally uses her Thai cooking skills to earn extra money. She works several jobs, from cooking to cleaning, to gather enough money to live and send home to her family.

“The scary part for me is coming closer to the time when I have to go back home to Khon Kaen,” Noi said. “We only have enough money to buy round trip tickets, but not enough to give to my family. So we end up borrowing money every time we come back to Thailand in order to convince my family that I have a good life in Germany.”

For the month that she returns home, Noi is expected to treat her family of 12 people every day, from taking them out for meals and drinks to buying them new clothes. She must also help renovate the family home and start building a new one on her parents’ land.

This shows her neighbours that she leads a comfortable life.

“It’s all about saving face,” Noi explained. “I have to do all this so that my parents won’t be embarrassed. It’s an exhausting act — I have to convince my family that I have a good life when I don’t. We have to work hard to pay off the debt every time we come back from Thailand.”
As the government noticed a trend of Thai women moving abroad with foreign husbands on the rise, Ms Dusadee was asked to use data from her research to help prepare these women for a life abroad.

In her travels to several European countries for field research, she realised that the lives of Thai women abroad wasn’t as ideal as many people at home believed it to be. She found that over 90% of Thai women married to Westerners had been in unsuccessful marriages with Thai men. They described their ex-husbands as lazy and irresponsible.

For many of these women, the reason they chose to pursue Westerners was the imagined financial security that came with it.

“In the past, the trend was that Thai women over the age of 40 who had been married at least three times got married to older foreign men,” Ms Dusadee explained.

“Then the trend shifted towards younger Thai women marrying older foreign men. But now the trend is Thai women and foreign men of the same age marrying. The men are mostly young backpackers who come to Thailand on vacation. No matter how much the trends have changed, the women consistently equate farang men with money.

“The real challenge for cross-cultural marriages is dealing with the cultural differences. Foreigners don’t understand that when they marry a Thai woman, they become married to her family too. They then have to support her family the way these women do before they get married.”

Her research also found that only a small group of Thai women get married with rich foreign men. Most Thai women in these marriages end up with middle- to lower-class men.