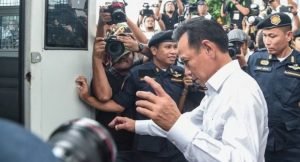 MEECHAI RUCHUPAN, chairman of the Constitution Drafting Committee (CDC), has suggested that ex-commerce minister Boonsong Teriyapirom, who has been jailed for 42 years for his role in fake rice export deals, should disclose all the crucial details of the case during an upcoming review of the Supreme Court’s sentence.

According to the High Court, Boonsong and 19 others violated multiple sections of the Criminal Code, anti-graft and state auction laws by implementing four bogus government-to-government (G-to-G) rice export deals to private companies that sold them to a foreign country, resulting in Bt16.9-billion financial damage to the state.

According to the court, the sales did not meet the criteria for G-to-G deals and the rice was not shipped to China as claimed by the defendants.

More than four million tonnes of government-owned rice, purchased from farmers under the pledging scheme, were sold without auction to Thai private firms at a low price instead of being exported to China as announced by the Commerce Ministry.

Meechai’s suggestion followed a Facebook post by Suranand Vejjajiva, a friend of Boonsong, in which Suranand expressed his sympathy for the ex-minister and wrote that Boonsong had previously refused to disclose crucial details of the bogus G-to-G deals during a private conversation.

According to Suranand, Boonsong insisted that he could not say anything at all with regard to the contracts.

Under the current Constitution, both defendants and plaintiffs could seek an appeal on verdicts delivered by the Supreme Court’s Criminal Division for Political Office Holders within 30 days regardless of whether there is new evidence or not.

Regarding the possibility of Boonsong’s temporary release while seeking a review of his case, Meechai said such a decision is made by a panel of judges responsible for the case. The judges already rejected Boonsong’s first bail request last Friday due to his lengthy jail term.

Boonsong was ill during the weekend inside Bangkok’s Klongprem central prison, according to his lawyer, Narin Somneuk.

Meanwhile, a lawyer presenting Manas Soiploy, former director-general of the Department of Foreign Trade, who was also sentenced to a long jail term in the fake rice deal, said the High Court will be requested to consider temporary release of Manas and other former senior officials as they seek a review of the verdicts.