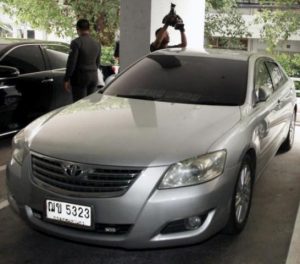 Democrat Party leader Abhisit Vejjajiva said on Monday that postponement of the court-verdict reading in the case against former Prime Minister Yingluck Shinawatra could affect how the defendant approaches an appeal once the new law governing criminal procedures against holders of political office receives royal assent.

If the law was promulgated before the verdict was read, the defendant in this case must appeal before the court to make an appeal, while there would be no statute of limitations regarding the case.

Under current criminal law, a court is given the freedom to prolong reading the verdict in the event that a defendant is absent. An arrest warrant would be issued and a deadline set for finding and returning the defendant. The court would then decide whether or not it would read the verdict in absentia.

This is because the law stipulates that an opportunity must first be made to ensure the court reads the verdict before a defendant, Abhisit said. This suggests the court could read, or choose not to read, the verdict against Yingluck on the September 27 date previously announced by the judges.

However, if the court read the verdict and sentenced her to time in jail, it is likely that Yingluck would not give herself up. An appeal would also not guarantee a victory and her freedom.

Abhisit said these scenarios make it unlikely that Yingluck would show up at the court on September 27 to hear the verdict in charges that she was derelict in her duty to ensure proper procedures were followed in relation to her government’s rice pledging scheme.

The police panel set up to probe into the police officers who allegedly helped former prime minister Yingluck Shinawatra’s escape a Supreme Court ruling is coming under criticism for its trustworthiness.

The panel, held by Pol Col Kiattipong Nala, deputy commander of Metropolitan Police Division 5, will meet Monday for the first time. It will investigate the activities of Pol Col Chairit Anurit, former deputy commander of Metropolitan Police Division 5, and two other officers of lower rank from the provincial police office in Nakhon Pathom province in relation to Ms Yingluck’s escape. Critics question how the panel can efficiently probe the matter when the panel chief shares an equivalent rank as suspect Pol Col Chairit.

Suriyasai Katasila, an academic and ex-yellow shirt core leader, on Sunday called for the National Council for Peace and Order (NCPO) to change the panel, saying the team will fail to win public trust as long as it consists only of officers who have to probe their colleagues. He said he was afraid investigators will end up charging the suspects with petty offences such as using a fake car licence plate.

Meanwhile, a legal expert who asked not to be named pointed out that those caught helping Ms Yingluck escape are likely to be found not guilty of violating the law because the escape and their alleged help took place before the arrest warrant was issued on Aug 25, after Ms Yingluck failed to show up at the Supreme Court’s Criminal Division for Holders of Political Positions to hear the ruling in her dereliction of duty case.

A source, meanwhile, disclosed details of the three police suspects following initial inquiries. Pol Col Chaiyarit told investigators that on Aug 23 he drove a police patrol car to the car park of Tesco Lotus on Watcharaphon Road in Bangkok to wait for Ms Yingluck at 6.20pm. Five minutes later, a black Mercedes-Benz car parked by one side of his car.

He could not see at the time if she was in the car, and can’t remember the Mercedes-Benz’s licence plate number.

Afterwards, the Mercedes-Benz pulled out and led his car to the Chaiyaphruek housing estate in the Watcharaphon neighbourhood where it entered soi 23 of the housing estate while Pol Col Chaiyarit was waiting in the patrol car at the entrance to the soi.

About two minutes later, a grey Toyota Camry carrying the licence plate number Nor Yor 2123 Bangkok emerged from the same soi and led his car away, said Pol Col Chaiyarit, who admitted to being aware by then that Ms Yingluck was inside the Toyota car.

He then switched to the Toyota Camry when both cars stopped at his house on soi 38 of the housing estate. When he got into the Toyota Camry he found Ms Yingluck and her female secretary, both wearing black surgical masks fully covering their mouths and noses, and a dark cap.

From the housing estate project, Pol Col Chaiyarit drove the car into Ram Intra Road, heading to Min Buri district, turned left into Suwinthawong Road, headed on to Chachoengsao province and then travelled on to Sa Kaeo province. They arrived in Aranyaprathet district of Sa Kaeo about 10pm on Aug 23 and proceeded to an area on Suwannason Road about one kilometre from the Aranyaprathet train station where a dark-colour pickup truck was waiting, Pol Col Chaiyarit said.

A man about 180 centimetres tall walked towards the Toyota Camry car after it parked behind the pickup truck to pick up Ms Yingluck and her secretary before leaving in the pickup truck together. Pol Col Chaiyarit said he could not tell whether the man was a Thai or a foreigner.

Pol Col Chaiyarit said after that he drove on for about 500m and parked the Toyota Camry to catch some sleep until about 2am when he returned to Bangkok.

He was home by 6am and left the car there until Aug 28 when he replaced the car’s licence plate to a new one — Chor Khor 5323 Bangkok — and drove it to Pol Sen Sgt Maj Pornpipat Makboonngam, another suspect, in Nakhon Pathom.

Pol Sen Sgt Maj Pornpipat told investigators he left the car at his restaurant, just opposite Silpakorn University, on Aug 30. He then contacted Pol Lt Col Samitr Chaiya-uenkham, a police investigator in Nakhon Pathom to get the car disassembled.

There will be no prosecution of Col. Chairit Anurit, a deputy commander in Bangkok’s metro police, and two other officers suspected of aiding fugitive former premier Yingluck Shinawatra’s Aug. 23 flight from the country were released at around noon.

They were not charged because there was no warrant for Yingluck’s arrest at the time, deputy national police chief Gen. Srivara Ransibrahmanakul said.

The two lower-ranking officers were Lt. Col. Samit Chai-inkam and Sen. Sgt. Maj. Pornpipat Makboonngam. All three were reassigned to (inaktive) jobs in operation centers in Bangkok and Nakhon Pathom.

Chairit, Samit and Pornpipat were taken early Friday morning to Royal Thai Police headquarters for questioning relating to Yingluck’s escape over a land border into Cambodia days before the verdict was to be read in her malfeasance trial.

Chairit, Samit and Pornpipat were taken early Friday morning to Royal Thai Police headquarters for questioning relating to Yingluck’s escape over a land border into Cambodia days before the verdict was to be read in her malfeasance trial.