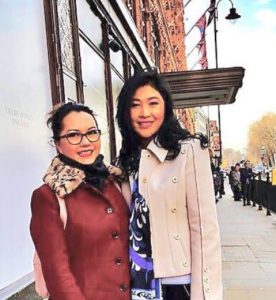 PM believes Yaowapa is hiding in Thai bolthole 19 Dec 2018
Prime Minister Prayut Chan-o-cha believes Thaksin Shinawatra's younger sister, Yaowapa Wongsawat, is "hiding" in Thailand as speculation grows she may face charges in connection with alleged irregularities… in the rice-pledging scheme. Gen Prayut's comment on Tuesday came after her former aide, Worawat Ua-apinyakul, said he had not been in contact with Ms Yaowapa for several months since she distanced…
I have no idea where she is, but I think she's hiding in the country," Gen Prayut told reporters. He also said he does not understand what Ms Yaowapa is up to as authorities have not yet taken action against…

Please credit and share this article with others using this link:https://www.bangkokpost.com/news/politics/1596590/pm-believes-yaowapa-is-hiding-in-thai-bolthole. View our policies at http://goo.gl/9HgTd and http://goo.gl/ou6Ip. © Bangkok Post Public Company Limited. All rights reserved.

Gen Prawit’s warning came after the Office of the Attorney-General (OAG) revealed on Tuesday that the agency has not yet requested she be extradited due to a lack of information about her whereabouts.

Gen Prawit said Thursday that prosecutors, police and the Foreign Ministry must work together to track down Yingluck or face prosecution under Section 157 of the Criminal Code.

The section concerns malfeasance or dereliction of duty committed by state officials.

Meanwhile, Tida Thavornseth, chief adviser to the United Front for Democracy against Dictatorship, said there is no chance that Yingluck would be sent back to Thailand.

“We cannot force them [other countries] to do that,” Ms Tida said.

She said she believed malfeasance charges would not be brought against officials who fail to bring Yingluck back since they had done their jobs.

3,209 Viewed
FUGITIVE FORMER prime minister Yingluck Shinawatra is living in the United Kingdom on an entrepreneur visa, and has not received political asylum, according to media reports citing sources familiar with the matter.

Yingluck applied for a Tier 1 (Entrepreneur) visa, which allows the holder to stay in the UK for a maximum of three years and four months, reports quoting unnamed sources in Pheu Thai Party said.

According to the website gov.uk, which contains information about UK government services, people from outside the European Economic Area and Switzerland may apply for Tier 1 (Entrepreneur) visas if they have access to 200,000 pounds (Bt8.7 million) in investment funds.

The holders can apply to extend the visa for another two years and possibly for settlement once they have been in the UK for five years, according to the website.

There has been speculation that the former prime minister might apply for political asylum to stay in the UK after fleeing Thailand to escape imprisonment.

Yingluck, a fugitive under Thai law, has been spotted in the UK on many occasions over the past month with photos of her taken in London circulating on social media before and after the New Year holiday.

Pheu Thai confirmed yesterday that Yingluck, a key former leader of the party, was in the United Kingdom, although party members claimed they did not have any further details about her location and legal status.

Phichai Nariphathaphan, another leading figure of the previously ruling party, said Yingluck was in the UK and the recent photos circulating on social media were genuine.

“But I don’t know if she has applied for political asylum or not,” he added.

“We follow her news from the media. There has been more and more news [about Yingluck]. Things will get clearer soon,” he said.

Yingluck may get special UK treatment

By THE SUNDAY NATION

FORMER prime minister Yingluck Shinawatra may have been given a provisional visa by the UK based on humanitarian grounds while her application for political asylum is considered.

The UK law allows applicants to stay in the country for up to five years for those who are qualified and are approved by the UK’s Interior Ministry, according to a senior Thai public prosecutor.

Responding to the recent sighting in public of Yingluck along with an unidentified Thai woman in London, Thanakit Worathanachakul, a senior prosecutor at the Office of the Attorney-General, said the former premier could also seek a further five-year extension to stay in the UK after completing the first five years.

Yingluck fled the country last year just before the Supreme Court was due to read its verdict in the case against her over her government’s rice-pledging scheme. The court sentenced her to five years in jail for neglecting her official duty while supervising the scheme, resulting in a massive financial losses to the state.

According to Thanakit, it is highly likely that Yingluck has already applied, or will soon apply, for political asylum in the UK. Citing the UK’s law, he said there must be substantial evidence and reasons to justify the application for asylum. For example, applicants may state that they are fearful of maltreatment, physical assaults and unfair prosecution if they return to their home country.

Applicants may also seek political asylum based on racial, religious, nationality or political grounds as soon as they arrive in the UK. Afterwards, they will be interviewed by UK officials, who will review documents and other evidence provided by the applicants and their lawyers.

Applicants also need to provide information on their place of residence in the UK, while their spouses and children under 18 may also apply for the same status subject to approval by the UK Interior Ministry.

If the applications are rejected, they can lodge an appeal with the UK court to review their request. Thanarit said applicants who get approval would be able to stay in the UK for five years after which they could seek an extension of another five years if they could prove they still faced persecution in their home country.

In the event that any applications are rejected by the court due to lack of qualifications, the applicants, their spouses and minor children may still stay in the UK on humanitarian grounds for a period of five years with a possible extension of another five years.

Thai authorities said they believed Yingluck did not use her Thai passports to travel and enter the UK since the documents were already invalid.