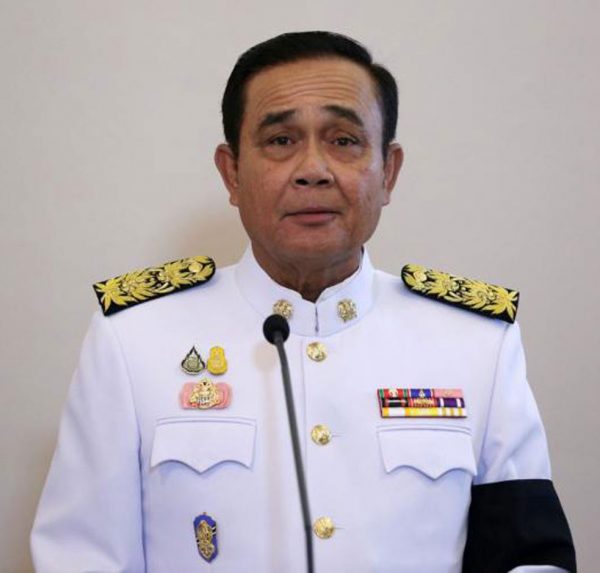 When the top American diplomat visits Bangkok later this month, he may come bearing a gift prized by generals in both nations – a declaration that democracy has been restored in the kingdom along with full bilateral ties.

U.S. Secretary of State Mike Pompeo’s mission to recommit American support for its regional partners may settle sharp debate in the halls of American power on recognizing the March election as “free and fair,” despite expert consensus it was not and the stain of ongoing violence against Thai dissidents.

“There’s no such thing as a return to democracy. The election was a sham, and now it’s clear the repression in place since the coup is still going on. If you get in the way of this regime, you get bloodied,” Sunai Phasuk, senior Human Rights Watch researcher on Thailand, said Tuesday.

Sunai believes Friday’s brutal assault of Sirawith Seritiwat, a leading pro-democracy figure, coupled with Monday’s threats by the junta leader to stage another coup, likely snuffed out the debate between the Pentagon and U.S. State Department – for now.

“As a result of that, it has taken away this lame excuse that an election would be the lowest bar for the U.S. and others to resume normal relations,” he said.

Such a declaration, required under U.S. law, would clear the way to restoring full diplomatic and military ties, something generals in both nations have been eager to see happen, if for different reasons.

The chief regional advocate at Amnesty International said Tuesday he doubted recent developments have affected the Pentagon’s “tunnel vision,” saying the American military was “leaning heavily” on the diplomatic corps amid a contentious internal debate over normalizing ties.

“The Department of Defense is leaning heavily on the State Department to either issue a certification or a national security waiver,” said Francisco Bencosme, Amnesty’s Asia Pacific Advocacy Manager. “To the point where the human rights and democratic considerations are being sidelined.”

He added that though it has normally left up to the State Department, “it increasingly feels like military interests are calling the shots.”

W. Patrick Murphy, state’s deputy assistant secretary overseeing East Asian and Pacific affairs and former charge d’affaires in Bangkok, said by email Tuesday that he was not currently responsible for Thailand policy and forwarded inquiries to a spokesperson in Washington. They had not responded further by publication time.

The 2014 coup led by then-army commander Prayuth Chan-o-cha triggered Washington to suspend some aid and reduce military cooperation. The annual Cobra Gold military exercises – a great source of Thai military pride and prestige – were scaled back.

The Trump administration has taken a very different approach to authoritarian regimes. Where President Obama kept the Thai junta at arm’s length, Trump invited Prayuth to the White House for an official state visit in October 2017.

The Pentagon wants to safeguard the regional position close cooperation with Thailand has afforded since the Cold War.

After delaying promised elections for four years, Prayuth’s military government allowed them to go forward in late March after sponsoring a constitution that skewed the rules heavily in its favor. After a vote widely seen as flawed, the ruling junta picked all 250 members of the upper house – packing it with family, friends and allies – to narrowly secure Prayuth’s hold on power on June 5.

Leading under even a semi-democratic framework hasn’t proved easy for Prayuth, who, facing rebellion within his own faction over cabinet posts, made a thinly veiled threat to stage another coup Monday.

Sunai said Thailand is eager for a full restoration of relations not just for the prestige of being an important, non-NATO U.S. ally, but also to open the gates for other nations to do the same.

He said he wasn’t surprised when a possible U.S. decision didn’t come two weeks ago as ASEAN leaders gathered in Bangkok for a summit headed by Thailand. He believes the prospects have dimmed further since.

Bleaker because stiff denials from the Government House haven’t quelled whispers of state involvement in the rising tide of violence against Thai dissidents. Sirawith, a 27-year-old who has spent the past five years campaigning against military rule, became the latest of several anti-junta campaigners to be seriously beaten in the past year.

The second such attack on Sirawith in just a month, which left him critically injured, came on the heels of similar attacks of other junta opponents, not to mention the disappearance and presumed murder of several dissidents who had been living in exile in Laos.

No one has been held accountable for any of the incidents.

A senior fellow with the U.S. Council on Foreign Relations said it would be an unnecessary mistake to normalize ties. He said Washington and Bangkok enjoy good relations nonetheless, and any hope they will go back to what they were in the 1980s was unrealistic.

“It’s not like Thailand and the U.S. have poor relations, and the cooling is only partly related to the 2014 coup,” Joshua Kurlantzick said, adding that despite an ascendant China, Thailand’s strategic importance to the United States is less than it was during the Cold War.

He noted a wild card in the debate was the U.S. Congress, which has taken an interest in the matter.

“Congress is historically bipartisan on this, and has for 20 years been pushing back on Pentagon and State when there’s issues of human rights,” he said.

The simmering debate erupted on the opinion pages of the Washington Post on June 8 with an unsigned editorial looking at Thailand’s “crude mockery of democracy” following Prayuth’s parliamentary victory.

The unusually informed piece  enumerated all the ways the Thai election should be regarded as illegitimate.

“The Trump administration has not hesitated to collaborate militarily with gross violators of human rights, such as the regimes of Egypt and Saudi Arabia. But a State Department certification that Thailand’s government can now be called civilian and democratic would trample a law Congress enacted precisely in order to deter what the Thai military has done,” it concluded.

As for when an announcement might be made, Sunai said he’ll be watching out when Pompeo arrives in Bangkok on July 29, where he is expected to recommit the United States to Southeast Asia.

Even then, he said it would “look totally absurd” for Washington to say the election “was good enough.”

Amnesty’s Bencosme said it would send “the wrong message at a time while human rights violations in Thailand would remain rife.”

“The Thai authorities continue to target opposition politicians and pro-democracy activists using spurious and politically-motivated charges,” he said. “This is no time to reward the military government with strengthened US support.”