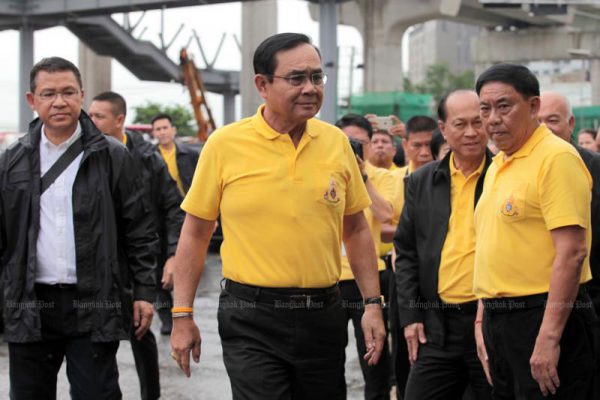 Cost of doing business in Land of Smiles

Several government megaprojects and ultra-lucrative concessions have long been a source of alleged corruption, questionable monopolies or "stupid" state incompetency in Thailand to the point it is sad that no one has been willing to do anything about it all these years.

The problem is some of the people in power who signed these multi-million or multi-billion baht contracts away were willing to let this corrupt, monopolising or stupid conduct take place rather than coming out to tell the public about what is going on behind closed doors.

Some of those involving in granting contracts and concessions took money and got rich while the country got poorer. Somehow they are fine with that.

For many private companies, it is easier to pay the officials under the table because the system is designed that way now. If you don't, someone else that might be less competent but has more money and is eager to comply, will.

At the same time, newspapers cannot print anything without proof as they are at risk of being sued. Therefore, corruption carries on in the kingdom, no matter what kind of government is in power. This is a public knowledge.

Former senator, Rosana Tositrakul, recently said the reason why members of the current coalition government fiercely fought over who gets control of the Energy Ministry is because of corruption; plain and simple.

Even though the ministry receives a modest budget of no more than 3 billion baht each year, compared to the 511 billion baht that the Education Ministry is going to get, the energy minister has the authority to approve projects involving oil, gas and power plants, as well as issue concessions to private investors, which can be worth trillions of baht.

That is a strong incentive to be fighting over for. The seats at the helm of finance and transport are also desirable for politicians for the same reason. We all know this, but this rotten practice continues to be a norm. That is unacceptable and since we cannot name names, let me write about it hypothetically.

Let start with the Hope is Gone project in a country called Smile. A contract for a mass transit project was signed three decades ago to build a multi-tier system above the existing main railway tracks of Smile's capital city. A 30-year, multi-billion-baht concession was signed with a private firm by the Smile government without proper vetting and feasibility study.

A timeframe of project completion was not included at the start of the bidding process but was added later on. Still, a businessman who proposed the project came forward with huge confidence and eventually won the concession, though the project was later scrapped as it encountered delays due to technical and financial problems. Obviously, it was not commercially viable.

Fast forward 30 years and another state agency called EXIT under the Smile government, this time with someone else in charge, was about to sign away a 30-year expressway concession extension to another private company called BEAM because they did not learn anything from the mistakes of their predecessor. The reason the state government wants to give the private company a 30-year extension is because they allowed the building of a competitive expressway, which is against regulations in the first place, and they do not want to pay the compensation. Another stupid price to pay from the people with no public interest in mind.

Another 30-year concession seems to have been given away to private companies without a care in Smile. Recently, another state agency under Smile called BAM is set to give away a 30-year-concession to a company called REAL for an underground cable project. With this, REAL could gain more market and bargaining power. The project's cost is estimated at 20 billion baht while the agency still has the gall to say that REAL will only lease cable conduits, not operate the whole system, which is missing the point.

Another example is the company called A Lot of Power which has won a bid to run duty-free shops at almost all of the international airports in Smile because they "offered higher returns". It is funny that this company has managed to win almost every concession when it comes to bids to run duty-free shops at Smile's airports when they are so many others competing for it. The next concession is for another Smile's airport called Don Mark which is awaiting approval from a new minister. Guess who will win again? My money is on A Lot of Power.

Another big company in Smile called PC also comes under scrutiny, in the past and present. The clearest case of insight is that everywhere you go in Smile, you will see its shop called 24/7 on every corner with some almost next to each other, even though this seems to be against regulations.

They also hold a big share in Real, and PC is now creeping into to both airport and transport businesses where more money can be made.

The new venture saw PC's consortium bidding for a rail link between three major airports in Smile before they decided to scrap the proposals which included extending the project concession from 50 years to 99 years, obtaining a subsidy for the project from the first year, lowering the single lending limit for PC, requiring the government to secure a low-interest loan of 4% per year, making the government pay compensation for damages caused by delays, and forbidding state agency from engaging in competing projects.

Even with the ridiculous initial bid, PC later still manged to win the concession for the approximately 220-billion-baht high-speed rail project to link the three airports with another bid in the end because it was the lowest bid.

The latest case in profile is the question of how did some of the richest men in Smile got to be this rich, this fast. Their wealth in some cases can be tracked back to government concessions in oil and gas from two previous governments as well.

Step back from the hypothetical world of Smile and come back to Thailand where no matter what kind of business you are running from selling food on the street, owning a bar or a restaurant or bidding for multi-million government projects, you will have to pay someone to get things done. Again this is common knowledge that Thais have been forced to live with.

The Future Forward Party on July 7 urged the public to inspect all concessions that the National Council for Peace and Order has granted during its rule has they might want to fast-track some of them during this transition to the new government.

The cases they have highlighted include the 30-year concession extension on a highway project, the rail connection between Don Mueang, Suvarnabhumi and U-tapao airports, and the high-speed rail link between Bangkok and Nakhon Ratchasima.

"Thailand will continue to run, with or without the government," an owner of a company told me when I asked him about corruption in the kingdom.

"The only thing that changes when a new government comes into power is the people that are collecting the (bribe) money. If you pay, they wouldn't mess with you," he said. Sad but true.

Fugitive former prime minister Thaksin Shinawatra will establish a new political party in the near future and then relinquish control of the Pheu Thai Party (PTP) to trusted lieutenant Khunying Sudara Keyuraphan, according to a PTP source.

The highly placed source said the new party, possibly to be called Pheu Dharma, would have both veterans and new faces from Thaksin’s inner circle among its members.

The Pheu Dharma leader could be Sompong Amornwiwat, only recently elected to lead PTP, and would likely have Anudit Nakhonthap as secretary-general, the source said.

Other members would be drawn from the disbanded Thai Raksachart Party, from among MPs not barred from politics by the Election Commission.

He is seen as sharing similar political ideas with FFP but does not have control over it.

Thaksin-affiliated parties have seen FFP gain popularity in their strongholds in the North and Northeast, where FFP is intensively campaigning with a view to future municipal and local administrative elections, the source said.

The source was speaking on condition of anonymity on Sunday, the 14th anniversary of the founding of Thai Rak Thai, Thaksin’s original party.

The source Thaksin would give Sudarat the title of PTP party president, having made Sompong its leader just last Friday.