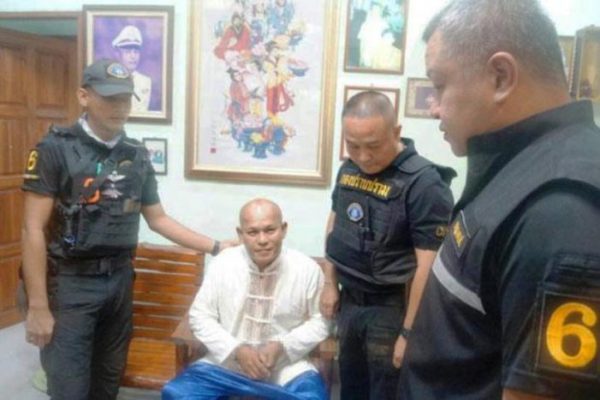 Suspected sex workers waiting outside while the police raided a bar in Si Racha, Chonburi on Aug. 15.

BANGKOK — Thailand continues to be a major center of global sex trafficking rings that extend to countries as far flung as Japan, Morocco and Germany, a UN report released last month says.

“In 2017, trafficking for sexual exploitation accounted for 255 cases or 84 per cent of the total 302 [human trafficking] cases in Thailand,” according to the United Nations Office on Drugs and Crime report, titled “Transnational Organized Crime in Southeast Asia,” which was unveiled at a Thursday news conference.

“Data from the Thai Office of the Attorney General indicates that of the 1,248 detected victims of trafficking for sexual exploitation in the 2014-2017 period, almost 70 per cent were underage girls,” the report stated.

In addition to women and children from Thailand and neighboring countries, the report notes that women from far flung regions such as Africa are also trafficked through Thailand. Similarly, trafficked Thais are ferried to destinations as far away as Japan and Europe.

“Men, women and children from Thailand and other Southeast Asian countries travel to Japan where some are subjected to conditions of forced labour or sexual exploitation, including fraudulent marriage,” the report said.

One involved a network from Uganda operating in Bangkok and Pattaya. The DSI apprehended 70 Ugandan women who had been charged USD$7,000 for the journey to Thailand. Upon arriving, the traffickers seized the women’s travel documents and forced them into prostitution to pay off the bondage debt.

The other ring originated in Morocco. Two Moroccan women were rescued along with 30 Burmese, Vietnamese and Syrian women.

Some Thais are not victims but perpetrators of trafficking. Between 2014 and 2016, the Japanese government convicted 12 foreign nationals of human trafficking, of which five were Thais. During the same period, Japan identified 20 Thai trafficking victims.

A crackdown in Germany in 2018 similarly identified both Thai victims and perpetrators in sex trafficking rings.

“A total of 32 Thai victims [of sex trafficking] were identified,” the report said. “The investigation reportedly found that a Thai woman and her German partner brought victims from Thailand to Germany on tourist visas and then forced them to work in brothels across the country.”