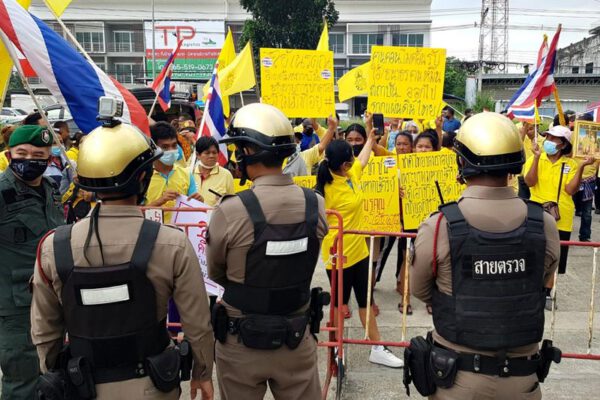 If the scene of a yellow-clad royalist crowd trying to surround and viciously attack a car they believed was carrying Thanathorn Juangroongruangkit, the ex-leader of the now-defunct Future Forward Party (FFP), at a hotel in a southern province on Wednesday, made the public concerned about the state of disorderliness in the country, the lack of police action in the case demonstrates something much worse. Indeed, the question now is if Thailand is on the verge of becoming a failed state.

Dozens of ultra-royalists gathered in front of the Ravadee Hotel in Muang district of Nakhon Si Thammarat on Wednesday upon hearing that Mr Thanathorn, now a co-founder of the Progressive Movement, would hold a meeting there. He is touring the southern province to help the campaigns of the group's candidates vying for seats in the Dec 20 provincial administration organisation (PAO) election.

The angry protest prompted Mr Thanathorn to cancel the meeting. There were reports that local police were deployed to maintain order at the site and keep the crowd from entering the compound. But for some reason, officers allowed the protesters to set up a checkpoint at the hotel's entrance and exit, and demanded all the cars leaving the hotel to lower their windows to see who was inside.

When one driver refused to comply with the demand, the protesters turned into a furious mob. Some attacked the vehicle with a flagpole. Video clips showed police were helpless as the scene turned ugly.

Eventually the protesters dispersed, not because police told them to do so or took any action. They left only when they realised Mr Thanathorn was not there. Protest leaders, however, insisted they did not plan to attack Mr Thanathorn, had they met him. That's not really believable.

Such barbaric scenes reminded many citizens of the red-shirt protesters who blocked a motorcade of then prime minister Abhisit Vejjajiva in Pattaya in 2009, at the time when the country was hosting an Asean summit, which eventually collapsed in chaos. It seemed then police were reluctant to take action as the crowd tried to reach Mr Abhisit.

Nakhon Si Thammarat police's clumsiness was seen in a different light when they decided to use jets of high-pressure water, tainted with chemicals, against pro-democracy demonstrators during peaceful rallies in Bangkok, not once but twice.

The government did not order any inquiry into the police's underperformance. Deputy Prime Minister Prawit Wongsuwon remained tight-lipped about the shameful incident in Muang district.

As of press time yesterday, Nakhon Si Thammarat police were not certain whether the yellow-shirt mob would be prosecuted. A senior police officer told local media that "no one has filed any complaint".

Such indecisiveness is a disgrace. Not taking immediate action in stopping the out-of-control mob at the scene shows the police do not care about law enforcement to maintain peace and orderliness. Their lack of will to punish those who intimidate others can only be described as a complete dereliction of duty.