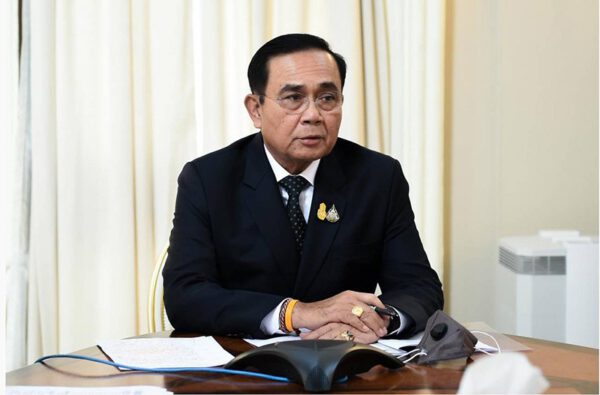 Prime Minister Prayut Chan-o-cha looks set to stay for the long haul after surviving three legal challenges which threatened to torpedo his premiership.

On Dec 2, all nine Constitutional Court judges found Gen Prayut not guilty of occupying an army residence after he retired from the armed forces.

On Sept 11 last year, the Constitutional Court rejected a petition lodged by the Ombudsman about the incomplete oath of office recited by Gen Prayut before His Majesty the King at his swearing-in ceremony on July 16. The court unanimously resolved that it didn't have the authority to weigh in on the matter.

Seven days later, the court ruled that Gen Prayut, as the chief of the National Council for Peace and Order (NCPO), was not a state official — a decision that cemented his position as prime minister. The ruling was made in response to a petition from opposition parties.

They argued that Gen Prayut, in his capacity as chief of the now-defunct NCPO, was a state official — as such, he was not eligible to hold the post of prime minister after last year's election.

The court said the position of the NCPO chief came to be as the result of the seizure of power by coup-makers in 2014, and as the post was not under the command or supervision of the state, Gen Prayut was not a state official.

Anyone who has wondered or insinuated that the student-led protest movement for Thailand's fundamental reforms must somehow be sponsored by some foreign government or politically motivated agents at home need look no further than the Constitutional Court's unanimous decision to clear Prime Minister Prayut Chan-o-cha of violating the 2017 charter by staying in army housing after retirement. In a 9-to-0 verdict, the nine-member bench sided with an army regulation over charter stipulations. The controversial verdict will exacerbate Thailand's political polarisation and add to popular grievances that are backing the student-led reform drive.

When no longer on active duty, army officers are supposed to give up their perquisites, particularly the use of housing, utilities and servants free of charge. Yet a subsequent army regulation exempted commanders-in-chief from the rule if they "continue to serve the country well". The Constitutional Court's conclusion that Gen Prayut did not violate an ethics code or commit conflicts of interest as a state official holds far-reaching implications.

Whether Gen Prayut has "served the country well" is also a matter of debate. Certainly, Gen Prayut has not fulfilled his pledges to promote reconciliation in Thai society and reform of Thai politics when he staged the military coup in May 2014. Thai society is more bitterly divided today in view of ongoing street protests, led by younger generations who are fed up with Thailand's lack of a promising future as a country. Thai politics has gone backwards in a reactionary fashion towards more military-authoritarianism instead of progressive democratisation.

Under Gen Prayut's watch, the military government that emerged from the putsch six years ago arranged for the 2017 constitution to safeguard its political power indefinitely. Consequently, Thailand is beset by early signs of economic stagnation and deeper political malaise. That all of this is interpreted as the prime minister having "served the country well" is baffling.

Unsurprisingly, the court's decision has been roundly questioned. Thailand's current constitution, even as a by-product of a military coup, should be the supreme law of the land, not subsumed under army regulations. At issue was whether the prime minister and former coup leader who seized power to begin with contravened charter sections 184 and 186 by accepting benefits from a state agency, such as the army. While this verdicts sets a worrying precedent for other high-ranking state officials and army officers who reach retirement age, it is par for the Constitutional Court's course.

As its members have been appointed over the two coup periods during 2006-2014, the Constitutional Court's judicial activism has been seen as partial to established centres of power. Otherwise how can we explain the invariably one-sided decisions against oppositional forces since 2006? The most salient among them was the disqualification of then-prime minister Samak Sundaravej in September 2008 for hosting a cooking show on television and receiving a token honorarium for it. Samak was deemed to be a state employee and therefore disallowed from receiving such a payment. The real reason of course was that Samak had led a government under the Palang Prachachon Party under the control of ousted former prime minister Thaksin Shinawatra. Under pressure from anti-Thaksin yellow-shirt protests, the Constitutional Court duly stepped in when the time came.

Evidently, the court has repeatedly invalidated elections and dissolved major political parties only on one side of the Thai political divide, first those associated with Thaksin and most recently with Future Forward under Thanathorn Juangroongruangkit. But when it comes to Gen Prayut, he was earlier ruled not to be a "state official" under conflict-of-interest scrutiny because he came to power via a military coup, tantamount to ratthathipat. In this land, if someone can unilaterally and coercively take power and rule over the country by force, he has done nothing wrong.

The same bench, on the other hand, refused to rule if the current cabinet is legitimate when it did not complete its due oath of allegiance based on constitutional stipulations. That Gen Prayut is untouchable and that this government cannot be fairly taken to account in the judicial system should not come as a surprise by now. If a convicted criminal can be a cabinet minister in contravention of the constitution for having served time in an Australian jail, the bar is very low. In fact, there is no accountability bar when it comes to Gen Prayut, his ruling party, and government.

What the Constitutional Court has been doing further polarises Thai politics, adding to the growing sense of injustice and an uneven playing field. Since 2006 when the so-called "judicialisation" began in earnest, when the judiciary was tasked to direct and decide political outcomes, the Constitutional Court seems to have become so politicised that it has breached public trust and engendered growing criticism and cynicism. Even before the court's decision in the Prayut case, there was consensual speculation on social media platforms that the prime minister would be let off. The main contention among speculators in a foregone conclusion was whether the final verdict would be hedged with dissenting opinions or blatant with unanimity.

The court's unanimous exoneration of Gen Prayut reinforces the message from his allies and backers. They are intent on riding out the storm of anti-establishment protests and prevailing at any cost. They are saying forcefully that this is the way they are going to have it, and those who do not agree will just have to suck it up. As mutual concessions and compromise become a façade, Thailand appears set on a collision course.

So when people wonder how this student-led protest movement can keep coming back to the streets day after day, week after week, they should see and know that the real backers of these young Thais are the grievances of injustice, incompetence and unaccountability that the backers of Gen Prayut keep inflicting and coming up with. Notwithstanding right-wing deniers and royalist-conservative detractors, these genuine grievances are home-grown and their manifestations are homespun.