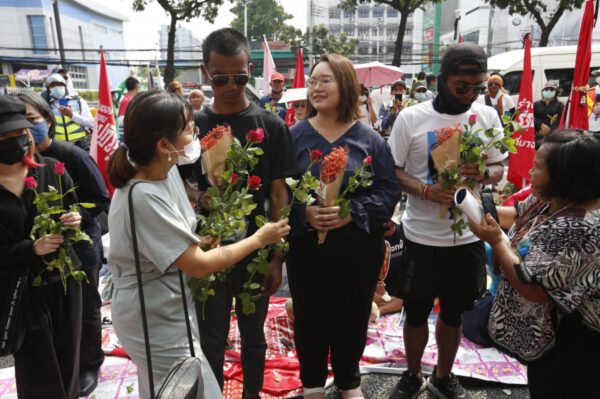 What does the pro-monarchy camp gain by applying the controversial lese majeste law with full force?

Crushing the budding monarchy-reform movement before it grows out of control?

Certainly. But the annihilation of "subversive" elements could come at a cost.

In opting for a heavy-handed approach, the establishment is amplifying the anger and cementing a sense of alienation among members of younger generations.

Prime Minister Gen Prayut Chan-o-cha declared in late November last year that "all laws and articles" including the controversial Section 112 of the criminal code would be enforced against anti-government protesters who were also demanding reforms of the monarchy.

Since then, more than 60 people, among them prominent leaders of the protest, have been charged.

A dozen of whom have also been detained with their bail requests repeatedly denied.

The rage against the overall system and animosity towards the government and its ultra-conservative backers has grown remarkably.

For the "liberals", slapping protest leaders who questioned whether the current role and status of the monarchy rightfully conforms to its constitutional status with the lese majeste law that has been largely unchanged since the time of absolute monarchy is outrageous.

Most of these activists view the lese majeste law as "flawed", particularly as it carries no definition of what constitutes the punishable act of "defaming, insulting or threatening" the King, Queen, Heir-Apparent and Regent.

That is why it has even been used against people who discussed the royal institution in good faith. Also, the law allows anyone to act as a plaintiff to file the charge against others.

The government failure to not only heed the voices of those who have called for the law to either be amended or abolished but also punish them has only added fuel to the fire.

Key members of the pro-military People's Democratic Reform Committee (PDRC) including three former ministers of the Prayut cabinet who took part in laying siege to parts of Bangkok and blocked people from voting in the 2014 election were granted bail after they were sentenced to several years in jail.

But the anti-government leaders who were charged with lese majeste, which is largely viewed by international standards as a "thought crime" that doesn't warrant such a long jail term, were imprisoned even before their cases had gone court.

They were also denied bail.

In the course of four months since the PM made a U-turn to reapply the lese majeste law, what was once unthinkable has become plain to see, and not just on social media.

What the older generation might have gossiped or whispered about pales in comparison to what has been written on placards or expressed in posts online.

Are the deepening of the anti-monarchy sentiments and further rage against the establishment a worthy trade-off for an immediate grip on power?

Extend the climate of fear so that people feel there is no hope or point in standing against it seems to have worked so far.

But institutions only survive long-term if they think long term, and the establishment may not necessarily have the upper hand.

It's clear the young are not with them. The landscape of tomorrow is not conducive to their oppressive ways and conservative values either.

With innovation, freedom of expression and meritocracy necessary to stay ahead of the game, how will the ruling elites, most of them are in their 60s and 70s, manage to keep the country competitive?

If heavy-handed tactics and the lese majeste law have only brought a once hidden anti-monarchy agenda into the mainstream, how much force will it take to contain in future?

More importantly, does the establishment have what it will take to maintain such a total control?

The fear factor may seem satisfactory to the powers-that-be right now but they constitute a major gamble considering the resources they have in store at the moment and what the future holds.