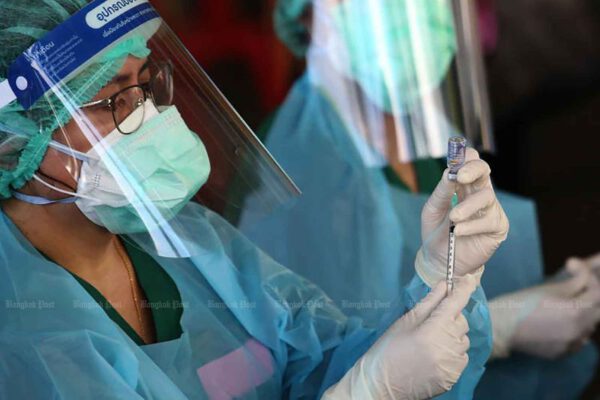 Govt has only itself to blame for jab fiasco

'Now is not the time to play politics.'' Prime Minister Gen Prayut Chan-o-cha often warns people criticising his government. Ironically, it's the PM and his team who should pay heed to this advice.

With nearly two weeks still to go before the first big lot of AstraZeneca vaccines will be available, more people are dying.

At the rate of nearly 30 Covid-19 fatalities per day, more than 400 lives could be lost before June, people who could have been saved had the government procured more Covid-19 vaccines sooner.

This is not a case of the benefit of hindsight. The government did have time to secure vaccines. It did receive plenty of warnings that its choice of pursuing only two vaccines to cover less than half the population was inadequate. It had been told since last year that the timing for the main AstraZeneca vaccine produced here for mass inoculation starting in June could be too late.

It chose to turn a deaf ear to the warnings. It had almost a year to put together its vaccination plan. It came up with one that was both too little and too late.

The third wave did come. And the outbreak seems to have got out of the government's inept hands.

Can Gen Prayut take responsibility for it? Can he honestly say the deaths were truly unavoidable?

The outcome speaks for itself. New infections spiralled to a new high yesterday, climbing to more than 9,000 while new clusters kept emerging in Bangkok. When it comes to the vaccination rollout, Thailand remains at the bottom in the region with just about 2% or 1.4 million of the population having received a first jab.

Even now when the third wave is raging, the country is still waiting for vaccines. Inoculating 50 million by year-end? Securing 150 million doses? Where? How? As each day brings about a new goal, scheme and dream, the vaccination rollout appears more like daily PR spin than a real plan.

The vaccine fiasco does not look like a case of unforeseeable circumstances either, but more one of policy failure, of negligence to fulfil the government's basic duty of ensuring that the Thai people have access to effective health services across the board, as prescribed by the constitution.

The Prayut government has no excuses for its Covid-19 vaccine flop. For whatever reason, it miscalculated. It failed to listen to advice. It kept playing the same old politics of brushing aside warnings and criticism as attempts by the opposition to "play politics". It even went about suing people who warned it about overreliance on SinoVac and AstraZeneca with no contingency plan.

The government and its vaccine procurement agencies can cite regulatory hurdles. They can blame global competition for their failure to buy enough jabs. They can say they have tried their best.

Still, they can't evade responsibility. The failure to secure enough vaccines took place on their watch. The ongoing deaths also happened on their watch. The chaotic inoculation rollout, the mounting vaccine hesitancy, the failure of some patients, especially the less well-off, to access medical treatment in time, are all happening under its watch.

Now is no time to play politics, correct. Now is the time for the PM, his government and vaccine-related mechanisms to eat humble pie and correct their past mistakes.

The government must turn away from its aristocratic, father-knows-best ways. Stop lecturing. To hear people who seem to have failed in their duty getting on their high horse and patronising others is annoying at best. At worst, the government will only anger the public and lose whatever confidence it still has left.

Stop preaching to people that they should get vaccinated to show they love the country. This is a practical matter which should not be tied to patriotism, or politics. Give them impartial, scientifically proven information and make sure they can make an informed choice.

Apologies would go a long way to rebuild trust. The government should own up to its mistakes. Deal with people who have failed in their duties. Fire them if it must. How can people continue to place their trust in the government if it does not show that it can recognise what is right, or wrong?

Stop being so prickly. The government and the PM have no grounds to be precious. The usual tactic of taking legal action against people who criticised its Covid-19 responses — accusing them of insulting the monarchy in several cases — only makes people suspect that it has something to hide.

Its use of the lese majeste law, which is supposed to protect the monarchy, to protect itself will only politicise the issue further. Such a distraction, a form of politicking, is unnecessary and totally unwelcome when all efforts should be focused on saving lives.